Google live launched the new Pixel 2 and Pixel 2 XL at its hardware event in San Francisco this week. And the world was on tender hooks to see if the tech giant could best the iPhone X and the Galaxy S8.

The end of the smartphone age…?

At the start of the event, CEO Sundar Pichai kicked off proceedings by stating that Google is in a transition from a “mobile-first company to an AI-first business”. Directly challenging Apple, Google’s new high-end smartphones are supported by machine-learning. The company demonstrated this live via a person speaking Swedish — while wearing wireless Google Pixel Buds headphones — to a person holding a Google Pixel phone and speaking English.

It’s got the look

However, one of the stand-out features of the Pixel 2 and 2 XL is the display quality and screen resolution. The Pixel 2’s 5-inch display keeps the same 1080p OLED panel as before, but the merging of the glass and metal is subtler – making for a really stunning look and feel. 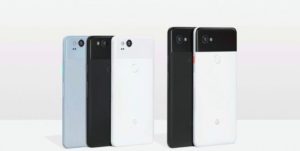 The biggest changes are actually to be found with the Pixel 2 XL. It now has a huge 6in display with an 18:9 aspect ratio, with an OLED and QHD+ resolution to match. The 2 XL has a full-screen front with rounded corners, covering almost the entire face of the phone; it’s not a perfectly edge-to-edge look, but there are just the minimum bezels at the top and bottom of the screen.

Google’s moved the fingerprint scanner down on both phones, taking it out of the glass block and onto the main metal body; which will reduce the number of fingerprint smudges.

One of the big new attributes on the Pixel 2 is its always-on display, allowing you to see the time, date, email and text notifications and reminders when the phone’s screen is technically turned off; it can even detect the song that’s playing and display that too. 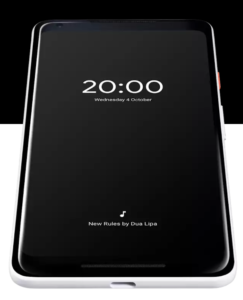 At a time when dual cameras seem to be the only way forward, Google has gone ahead with a single camera setup on the 13MP rear cameras. The single sensor is very large – as large as the fingerprint sensor itself – allowing for lots of light and great photography in poor conditions, as well as a high enough quality bokeh effect. There’s optical image stabilization on the rear camera that works with electronic image stabilisation to offer smoother video. And on the front, there’s also a 7MP camera for selfies.

A new addition is ‘Motion Photos’; which will record a three-second clip around each photo and bundle it into the file. While the Pixel 2 phones will also be the first to get ‘Google Lens’; which once activated will pull up information via Google on whatever the camera’s point at from books to landmarks – perfect for people working out and about and on the move.

And a continuing benefit that all Pixel owners will get is the ability to store all their photos and videos in original quality and indefinitely on Google Photos; allowing the offloading of photos to the cloud to free up local storage.

The two phones also have pressure-sensitive sides that can be squeezed to launch Google Assistant without having to power on the device. A nifty way to get around using the voice assistant’s wake phrase “OK, Google” in public – and brilliant for meetings and public travel.

Other features to note include dual front-facing speakers and a premium water-resistant body – although the downside is that neither phones will have 3.5mm headphone jacks, to allow for them to be waterproof.

The Pixel 2 and Pixel 2 XL are quite similar handsets with most of the same features. running the latest Android Oreo software and Qualcomm Snapdragon 835 chipset. The 2 XL is a slightly higher spec phone with a larger – and higher quality – screen and hopefully extended battery life.