It’s been ten years since the very first iPhone was introduced to the world. An unveiling that arguably changed the mobile landscape forever and positioned Apple as a leading innovator in the mobile space. Fast forward to 2017 and the tech giant has unveiled not one but three devices to the market, aiming to maintain its place as the second most popular handset creator in the world.

Introducing, the iPhone 8 and 8 Plus; set to have faster processors and better cameras than their previous counterparts, and the potential game changer for Apple, the iPhone X (or ten), the device that is set to tie together a number of trends in the mobile and tech industry.

With three iPhones arriving (almost) at the same time, we take a look at the devices on offer and whether their spec and capabilities will live up to the hype. 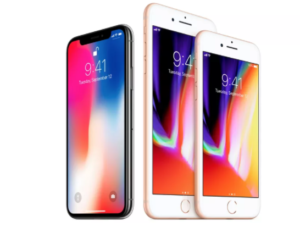 three devices feature an all-glass casing which Apple claims to be the most durable glass to ever feature on a smartphone. Partnered with a dust and water-resistant coating and things look to have taken a step forward for adventure-driven users, but let’s not forget that the likes of more recent Samsung devices have offered similar capabilities for months now.

The screen and display on offer are key talking points for the latest releases. Both the iPhone 8 and 8 Plus offer retina HD displays, making the display richer and more colourful. The iPhone X brings something else to the table – a 5.8 inch ‘Super Retina’ (2436 x 1125 resolution) full-screen display that challenges the likes of the Samsung Galaxy Note8. The highest resolution ever offered on a device, the screen promises vibrant colour and eye-catching detail.

For photography enthusiasts, the new iPhones will feature vertical 12MP dual cameras with in-built image stabilisation and lighting options, allowing users to capture more precise imagery whichever mode they are in. The camera is also capable of capturing slow-motion video at faster frame rates (240 frames per second) whilst content will be captured in an ultra-high resolution.

Say goodbye to the home button which has been a staple feature if the iPhone since day one if you are looking for an iPhone X, and say hello to Face ID – the biggest adjustment that iPhone users will have to make in years. Such a dominating feature is the new screen, the home button has had to be removed, allowing a new facial recognition feature to take its place. That said, the feature remains in iPhone 8 and 8 Plus for those who prefer the familiarity.

Sensors have been built into the front of the iPhone X including a 7MP ‘true depth’ camera whilst an upgraded performance chip – the A11 bionic processor – allows users to be recognised, regardless of whether they are in dark light, or have changed their hair colour. The A11 processor offers a higher performance than its predecessor – approximately 25 percent faster than the A10 in the iPhone 7 – and also prepares the iPhone X for both augmented reality, and the ability to create ‘Animoji’ – a new emoji that will mirror owners’ facial expressions.

With all the additional features on offer, the question surrounding Apple’s battery life remains a pressing one. Compared to Samsung, Apple has struggled in the past with battery issues but the iPhone 8 through to the iPhone X claim to offer an enhanced battery capability, reporting up to 21 hours of talk time. Moreover, charging cables will become a thing of the past. Apple has introduced wireless charging to its new devices – the same as Samsung’s Galaxy S8.

The latest iPhone bundle release – that shows Apple is beginning to catch up with the premium Android phones on the market – doesn’t come without a cost. The iPhone X is one of the most expensive phones ever made. Retailing at a starting price of £999 for 64GB, the device, to many, will be unaffordable and has received much criticism for the level of innovation on offer for such a cost.

For those who are desperate to test out the latest iPhones, the wait will soon be over. Aside from the iPhone X, the launch date is currently set for 22nd September, whilst those willing to pay the £832 starting price (excluding VAT) for the X will have to wait until early November.