Samsung has revealed three 5G compatible smartphones, in addition to its latest foldable, the Z Flip, at the manufacturer’s first Unpacked event for 2020.

The Samsung S20, S20 Plus and S20 Ultra are the next generation devices of its popular flagship Galaxy range. The S20 Ultra steps into the size of the Note 10 Plus, at almost 7 inches, with a quad-lens rear camera, 8k video recording capabilities, and a 120Hz display.

The Samsung Galaxy S20 is the cheapest handset in the range, yet it still packs in significant improvements to the camera and battery life. With three rear cameras boosting a 64-megapixel telephoto lens, the device also brings 3 x optical and 30 x digital zoom to its users and introduces Single Take Mode. Samsung claims this feature generates a mix of stills and videos using Artificial Intelligence. This allows users to choose from a selection of shots, which is great for content creators.

Powered by a 7nm chipset, 12GB of RAM and 128GB of storage, the S20 is more than capable of handling day to day requirements.

All three phones across the Samsung S20 range are built to shine in the spotlight of 5G. Each device offers Google Duo, displaying video chats in high quality whilst using 5G. For those interested in gaming, Samsung claims the benefit of its 5G connectivity is lower latencies, meaning gamers can react to events online far faster than ever before. There are also 4G variants available, and the price tag for the range starts at £624.99 (ex-VAT) for a basic 4G S20 device with 128GB of storage and 8GB RAM. For its 5G equivalent, pricing starts at £745.83 (ex-VAT) for the same level of storage and 12GB RAM.

The Galaxy Z Flip is limited to 4G connectivity only but is no less exciting. Its design features, including a flexible glass display and a hinge to keep out debris, bending horizontally to protect the screen, suggest further innovation is yet to come.

Arguably more user-friendly than other flip phones on the market, the Z Flip is designed to be used one-handed when opened and to fold down into ‘pocket size’ when closed. Samsung claims the device can be opened and closed more than 200,000 times. Whilst the spec on board is relatively modest, the Z Flip is expensive, costing an estimated £1,083 (ex-VAT). Users can purchase the device from the UK high street from the 14th February.

With several rivals set to release their counterparts in the next few weeks, Samsung may only have a small window in the spotlight. However, questions are being asked as to when and how manufacturers are now likely to launch their latest flagships, in light of Mobile World Congress being cancelled this year due to health and safety concerns.

Stay tuned to the Adam Phones blog for the latest insights and developments in the industry. Make sure to keep in touch with us on Twitter and LinkedIn. 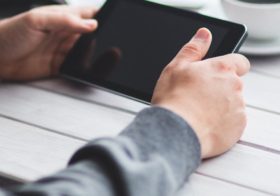