The 12 Data Days of Christmas

A recent report published by Ofcom has revealed that British phone owners are replacing talk time with data – preferring to communicate on screen rather than traditional voice.

Smartphones, social media and the increasing availability of Wi-Fi on the go have begun contributing to the demise of not only the landline but call time too.

Over a period of five years between 2012 and 2017, the number of minutes attributed to landline calls fell from 103 billion to 54 billion. During the same time period, Ofcom has reported the average person’s monthly mobile data use significantly increased, from 0.2 gigabytes to 1.9 gigabytes.

With Christmas being a popular time to reconnect with friends and family, we analysed anonymised data consumption from our proprietary billing platform to determine how usage varied over the Christmas period.

The twelve most popular data days of Christmas: 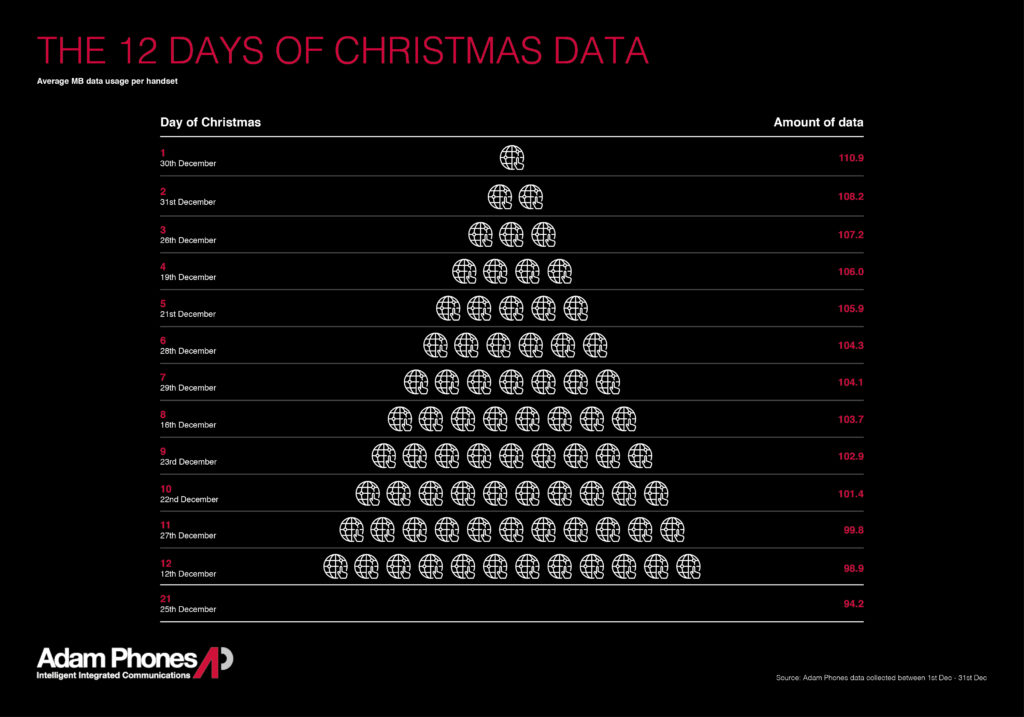 Perhaps unsurprisingly, the days leading up to New Year saw the highest daily averages of data consumption for the month (110.9 MB on 30th December, 108.2 MB on New Year’s Eve), as many users may have used the occasion to reach out to family members or friends. For others, the working days in between Christmas and New Year may have offered a good opportunity to re-visit existing projects.

In comparison, one of the quieter days of December was 25th, Christmas Day, which saw data usage falls to 21st place in our daily user average for the month at 94.2MB. Perhaps the distraction of family and friends or good food and celebration was enough to discourage data use? This trend didn’t last long however as on Boxing Day we saw average user consumption increase to 107.2MB as some users may have hit the sales!

What this information demonstrates is how data usage can vary dramatically, with certain events or even seasons encouraging more usage than others. Looking back to 2018 as a whole, our dataset has shown December to be one of the most popular months of the year for our customers to use data, second to the month of August, where overseas business or leisure travel can be at its highest.

Without the tools in place to view or control costs, these peaks in usage can create unexpected (and often increased) costs.

Whether you are the owner of your own device or the budget holder for a fleet of devices across an organisation – if you don’t know what you (or your users) are spending, it’s already too late.

At Adam Phones, our suite of online tools enables customers to make informed decisions on their data usage, meaning they can enjoy, and control spend throughout the month – and prepare accordingly should a surge of demand take place.

For more information on how you can increase your visibility or control over data use and spend, get in touch or visit www.adamphones.com