Welcome to a very special edition of our ‘Device Advice’ blog series, sharing our thoughts and insights into the most recent device releases from the world of mobile and beyond – this time we take a look at the key talking points of Mobile World Congress, 2018.

It happens every year, and the anticipation never fails to disappoint. This year’s Mobile World Congress (MWC) saw the release of Samsung’s latest flagship duo, a blast to the past with the re-launch of the Nokia 8110, a Sony device that is set to challenge the market leaders and a range of device upgrades that are set to meet any budget.

One of the obvious trends for MWC 2018 was the lack of bezels, as seen in the design of Apple’s iPhone X. Whilst some got it right, others chose to replicate the bezel-reduced iPhone a little too much – the likes of the Asus Zenfone 5 for example was revealed to the world as a living replica of Apple’s most recent flagship device!

In comparison, the Samsung Galaxy S9 and S9 Plus, launched at MWC, have kept the elegant glass and metal-look design that has made the Samsung line recognisable, whilst both devices feature smaller bezels on the front display than ever before. With a f/1.5 aperture camera – a world first for mobile phone use, AR Emoji (mirroring your expressions), a fingerprint reader and an operating system set to be 30% faster than the S8, the S9 and S9 Plus are set to challenge the iPhone X as the market-leading device of today.

After the successful launch of the revitalised Nokia 3310 at last year’s MWC, the 2018 event saw the release of the famous ‘Matrix Banana Phone’, the Nokia 8110. HMD Global, the company behind the Nokia brand has spent time refining and updating past and favourite Nokia phones for the modern day, as part of their ‘Nokia Originals’ series. 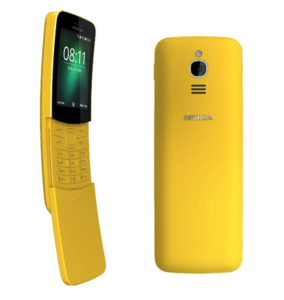 Nostalgia certainly has its place in today’s mobile landscape, with the CEO of Motorola also recentlyhinting of the release of its iconic Razr design, soon to make a mark.

Launched in a distinctive yellow (or more subtle black), the device requires the user to manually slide down the keypad cover to access the digits. It features a camera, but at 2MP with a single LED flash, this device relies more on its curved and stand-out design, rather than its capabilities – although it does offer 4GB of storage, and the infamous (and soon to be long lost) headphone jack!

Alongside this, Nokia also launched the Nokia 1, Nokia 6 (2018), Nokia 7 Plus and the Nokia 8 Sirocco which will all feature in the Android One programme, with operating systems that move away from bloatware, and focus more on rapid updates.

Suggesting a comeback on the horizon, Sony used Mobile World Congress as a launch pad for the Xperia XZ2 and XZ2 Compact. With a revised look and feel, moulding both glass and metal to create an ‘ambient flow’ design, Sony’s latest phones offer Full HD+ resolution, thinner bezels and operate on a Qualcomm Snapdragon 845 chip, with 4GB of RAM and dual SIM capabilities. Due to arrive in the first half of the year, it seems Sony is finally fighting back against the market leaders.

For LG, the story was quite different. After releasing the LG V30 last year, MWC 2018 saw the release of the LG V30S – identical to its predecessor, aside from additional storage and RAM. Rather than a launch pad for a new device or a jump in technical capabilities, LG appeared to treat MWC this year as nothing more than a platform to announce its software upgrade.

The year is only getting stared. With expectation from Google that the Pixel 3 will launch later in the year, we’re also expecting new flagships from LG, Huawei and HTC over the next few months, whilst a successor to the Samsung Galaxy Note 8 is expected just around the corner.