The Nokia 8 Sirocco, launched at this year’s Mobile World Congress (MWC) in Barcelona, was introduced to the world as the “ultimate statement of flagship design, with the latest screen and camera technology” according to its developers, HMD Global. A device, “made for the fans,” the launch of the Sirocco replaced the previously expected release of the Nokia 9. In fact, by the time MWC had taken place, HMD Global had surprised us with not one, but five new Nokia smartphones.

With great anticipation over what flagship model Nokia / HMD Global would release at Mobile World Congress, we take a look at the rumours that led up to the event. Were the predictions about the new Nokia 8 Sirocco (or the previously expected, Nokia 9) correct?

Early rumours in 2017 hinted that the flagship device would hit the market with an OLED display, the technology used by predominantly by Samsung. The new Nokia was also anticipated to offer a 5.5-inch display, with either a 16:9 or 18:9 aspect – making the device competitive amongst the market leader in display size.

The reality wasn’t too dissimilar. The Nokia 8 Sirocco offers a 5.5-inch OLED curved display with a QHD resolution. With good viewing angles, the device also offers a bright and colourful screen, excellent for gaming and video playback. 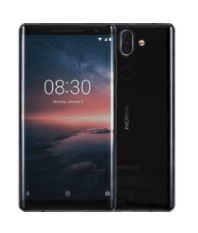 In its design, leaked images suggested that the previously anticipated Nokia 9 would adopt a look and feel similar to a Samsung device, with a metal core and a glass front and back. It was reported that the flagship model would be IP68 certified – making it dust-proof and water resistant, a component to device design that is becoming ever increasingly expected.

Now it’s been revealed, the Nokia 8 Sirocco has adopted the dual curved edges that Samsung introduced to smartphones. The Nokia flagship has a stainless-steel frame and also two pieces of Corning Gorilla Glass 5 at the front and rear which gives it a profile similar to the Galaxy 8 (and a premium feel) but at 7.5mm. The power/lock and volume keys sit as the thinnest tip of the phone at 2mm. The Nokia 8 Sirocco isn’t IP68 certified but is IP67 rated so it has a waterproof body.

Before the release of the Nokia 8 Sirocco, details surfaced in Nokia’s camera app update of telephoto and wide-angle lenses, which had yet to appear on any of the existing devices, hinting at features that could be present with the expected launch of the Nokia 9 (now Sirocco).

The rumours for the rear camera were spot on, with the Nokia 8 Sirocco presenting a pairing of a 12 and 13-megapixel camera so you can take those fancy bokeh effect (background blur) shots, or take advantage of the lossless 2x optical zoom. The front camera features a 5MP, 84-degree wide-angle lens which is sufficient for video calling. Nokia’s Pro camera mode has also seen a welcome return, allowing users to quickly enter ‘Pro Mode’, editing white balance, shutter speed and focus – putting the user back in control of their photos.

The Nokia 8 Sirocco is definitely an upgrade to its predecessor. It has the same core hardware and proved the rumours correct with a Snapdragon 835 chipset – although, worth noting, not the latest chip from Qualcomm. The phone also landed with 6GB RAM and 128GB of storage.

On the battery front, the Nokia 9 was rumoured to have a 3250mAh battery. As it was set to be a Snapdragon phone, it was likely going to feature Quick Charge technology.

Now revealed, HMD Global’s latest flagship comes with a 3260mAh battery which should power the device for two days and you also get Qi wireless charging thanks to the rear glass – something that the rest of Nokia phones don’t offer. There’s also Fast Charge 4.0 support so you can fast charge to 50 percent in 30 minutes.

All of this comes at a price. The rumour mill was in overdrive about the cost of the Nokia 9. Some sources believed the smartphone would jump in price in comparison to its predecessor, the Nokia 8. Others predicted that the Nokia 9 would not jump up significantly in price and we will have two models, a 64GB and 128GB.

The Nokia 8 Sirocco release date is April 2018 and will cost €749 – we don’t yet have UK pricing. The Nokia 8 hit the market at £415 (ex-VAT) so we will expect the Nokia 8 Sirocco pricing to be within a similar range – potentially placing the device as a more affordable option compared to its competitors.