Welcome to part one of a special edition of our ‘Device Advice’ blog, where we have taken a look back at some of the key smartphone launches between January and June 2018.

This year we have seen manufacturers put up a fight to be the best in the world. Bezels have decreased further; camera technology has evolved, and manufacturers are pulling out all of the stops with their flagships.

In 2018 we have seen some of the most expensive phones to date with smartphone prices hitting four figures, whilst the infamous notch is still extremely popular and doesn’t look to be going away anytime soon.

Next year, we predict that prices will continue to rise, as manufacturers’ continue to push the limits of technology. Reverse and wireless charging will be appearing more commonly, while in-screen fingerprint readers will finally be seen in the most wanted flagships. Most importantly, manufacturers will ensure that their latest and greatest devices to date, will come ready for 5G, in a year that is set to raise the bar for telecommunications.

However, for 2018, in a year where smartphone developments accelerated, we take a look at some of the leading device releases, specifically between January and June 2018.

The Nokia 8 Sirocco, launched at this year’s Mobile World Congress (MWC) in Barcelona in February, was introduced to the world as the “ultimate statement of flagship design, with the latest screen and camera technology.”

The Nokia 8 Sirocco adopted the dual curved edges that Samsung introduced to smartphones and a partnership with Zeiss that came to fruition in the Nokia 8 meant that Nokia had confirmed its intention to focus on the camera capabilities of the device.

The Sirocco is an upgrade to its predecessor, the Nokia 8; it has the same core hardware with a Snapdragon 835 but hit the market with 6GB RAM and 128GB of storage.

Whilst 2018 saw the price of smartphones begin to skyrocket, the Nokia 8 Sirocco was released to the public as a more affordable option, setting its competitive price difference quickly.

Also unveiled at Mobile World Congress was the Samsung Galaxy S9 and S9 Plus which saw Samsung stick to the elegant glass and metal-look design that has made the Galaxy line so recognisable.

Both devices feature smaller bezels than ever before, a f/1.5 aperture camera – a world first for mobile phone use, AR Emoji (mirroring your expressions), a fingerprint reader and an operating system set to be 30% faster than the S8.

The S9 and S9 Plus were set to challenge the iPhone X as the market-leading device.

In March, Huawei announced its next flagship phones, the P20 and P20 Pro. The releases marked a bold move for Huawei and a big step forward for the series.

Creeping up in price, the P20 Pro launched at around £665 but came packed with high end features, especially in the camera department.

The P20 Pro introduced three cameras on the rear of the smartphone to improve depth and definition of photographs. The device featured a 40-megapixel, 20-megapixel and 8-megapixel lens which compares favourably to the 2 x zoom of the Galaxy S9+ and iPhone X.

Powering each device is the Kirin 970 chipset. The P20 comes with 4GB of RAM, 128GB of storage whilst the Pro comes packed with an extra 2GB of RAM and is ip67-rated.

Huawei’s CEO Richard Yu said of the releases that he was keen to see the company achieve the much coveted ‘number one vendor’ spot by 2021 and the P20 series was set to be one of the devices to take it there.

After a shaky start earlier this year with HTC selling a large part of its phone division to Google for $1.1 billion before hitting a 13-year low in YoY growth in April, the HTC U12 Plus was announced in May.

The device came bursting with features and loaded with cameras, but compared to other flagships on the market, the U12 Plus, like the Nokia 8 Sirocco, was considerably more affordable.

The most dramatic difference between the U12 and other flagships was the ‘squeeze’ function, which was originally debuted on the HTC U11 Plus. Users can make long squeezes, short squeezes or squeeze and hold to confirm actions, each squeeze is customisable and triggers a different reaction – making the phone far more interactive than its competitors. 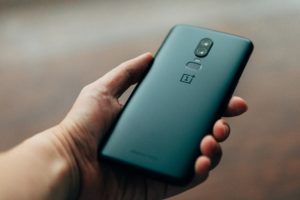 In as little as three weeks after the launch in May, the OnePlus 6 had sold over one million handsets, not bad for the Shenzen-based company, OnePlus, which has officially made the move from modest device creator to the top ranks of smartphone manufacturers.

The OnePlus 6 was unveiled to the world as “The Speed You Need” and it did not disappoint. The device contained the fastest chip on the market, the Qualcomm Snapdragon 845, which allows users to multi-task easily, switching between applications faster than rivals Apple or Samsung.

The device comes with 8GB of RAM and ran the Android operating system, OxygenOS, specifically customised for the OnePlus 6, with new features including app prioritisation and a new set of navigation gestures for ease of use.

Stay tuned to the Adam Phones blog for part two of our special ‘Device Advice’ blog, where we will recap the smartphone releases between July and December 2018. Make sure to keep in touch with us on LinkedIn and Twitter.

BYOD Blog Series (Part 3): Do you have suitable systems in place to ...